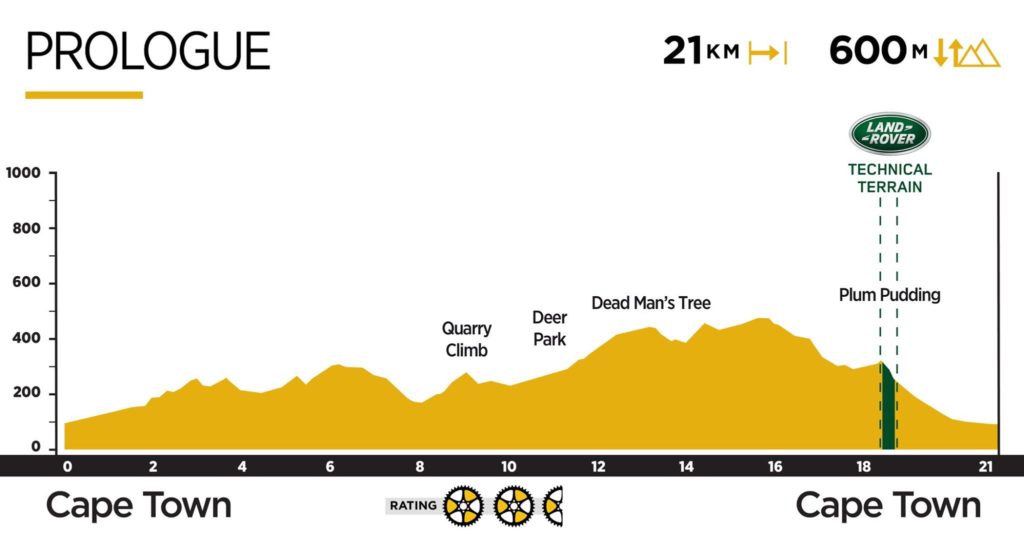 The Grand Depart
In 2019 Cape Town’s most iconic landmark plays host, for the fifth time, to the inaugural stage of the Absa Cape Epic. The Prologue is more than just a scene setter though; it hints of who has prepared best for the herculean task at hand. 21 kilometres long, with 600 meters of climbing, the route brings the world’s biggest mountain bike stage race to the fans. Riders will suffer up the “climb which cannot be named in print”, grind through the throngs of spectators at Dead Man’s Tree and test their skills on the race’s first section of Land Rover Technical Terrain – the Plum Pudding singletrack, all within the Table Mountain National Park. 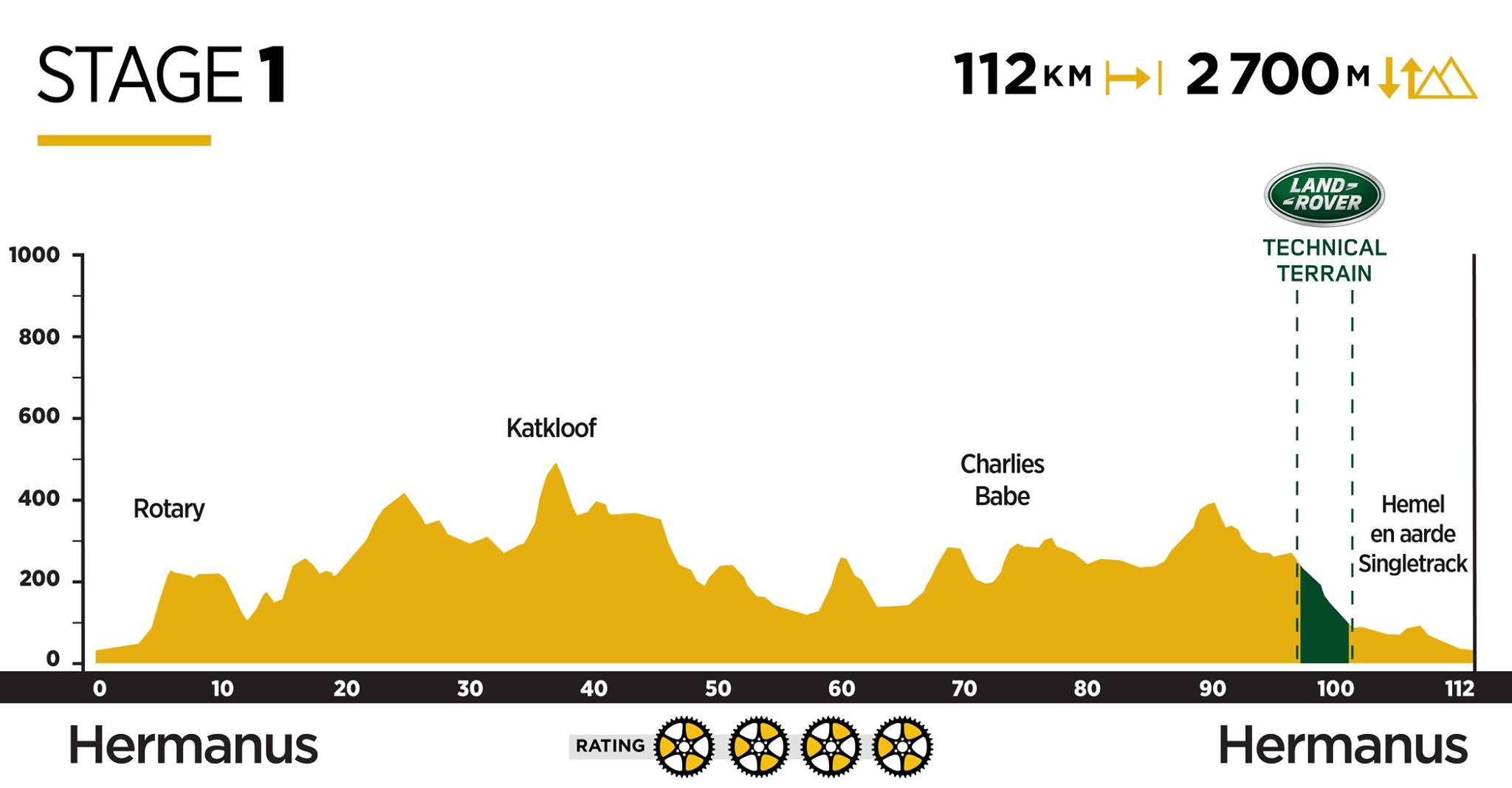 Heaven and Back to Earth
Relentless: a simple descriptor to a truly epic opening marathon stage. Rotary Drive, the La Vierge stairs and the Paddocks set the tone, Katkloof Climb with the Dimension Data Hotspot near the summit drive home the message. This is the Absa Cape Epic. Charley’s Babe reinforces Tesselaarsdal into Epic infamy. From Hemelsrand the ocean beckons, near but still so far. Reward to the strong and the brave is provided by the Gorge – proving the Heaven of the Hemel en Aarde Valley and providing the day’s Land Rover Technical Terrain. Beware though the final sting in the tail – Water Works. 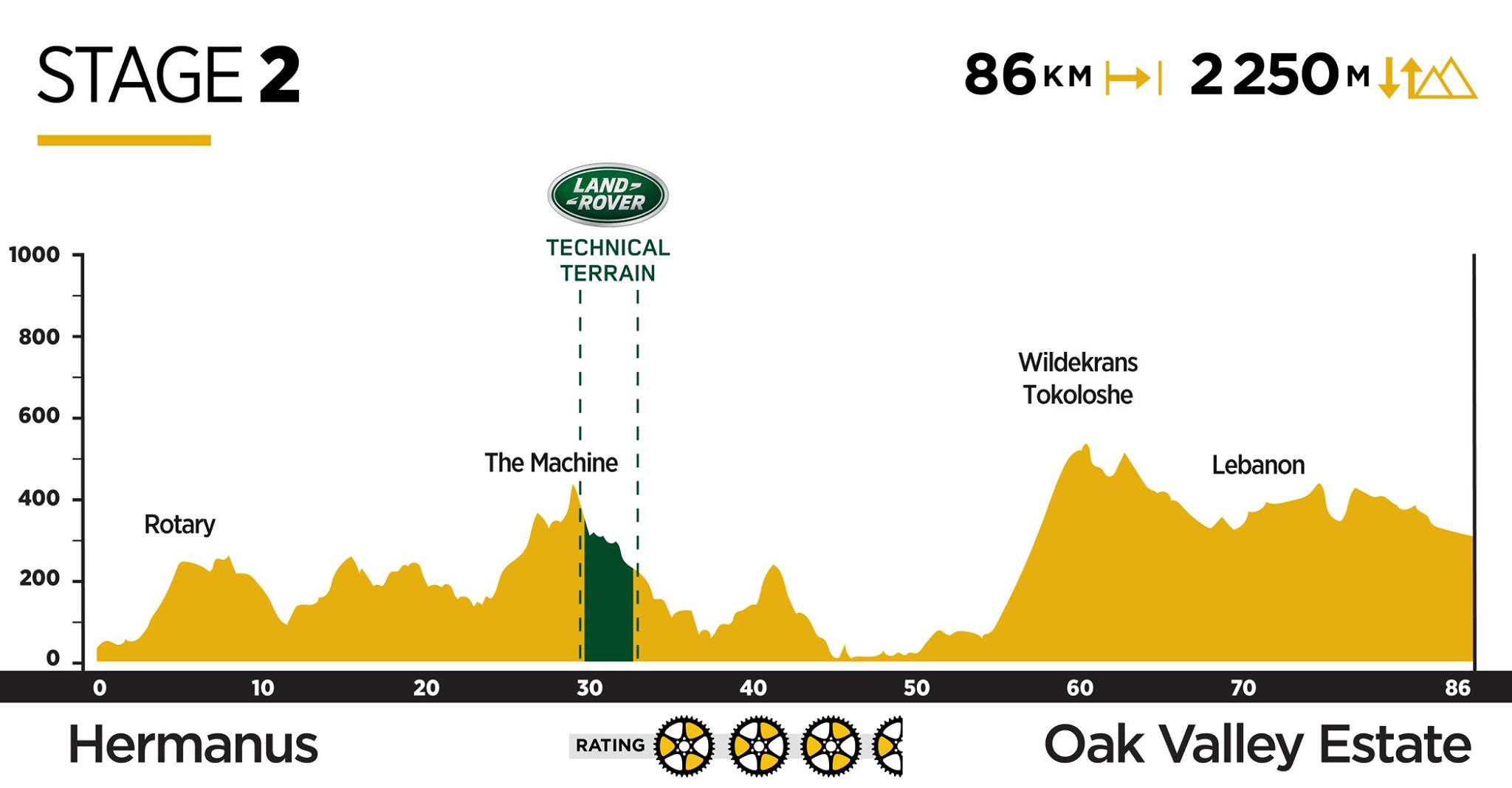 Enter Sandman
A teaspoon of cement is in order for the first move day of the 2019 race. Crossing out of the Hemel en Aarde Valley to the west – riders enter the Sandman’s soul. This section, dubbed The Machine, for the mysterious landowner known only by that moniker, similar characteristics will be needed to survive. The day’s highlight comes in the form of a brand new singletrack, carved into the Hottentots Holland Mountains by Wildekrans’ Braam Gericke. Named the Wildekrans Tokoloshe it is no mythical monster but a soil and rock giant which will need to be slayed to gain access into the Elgin Valley. 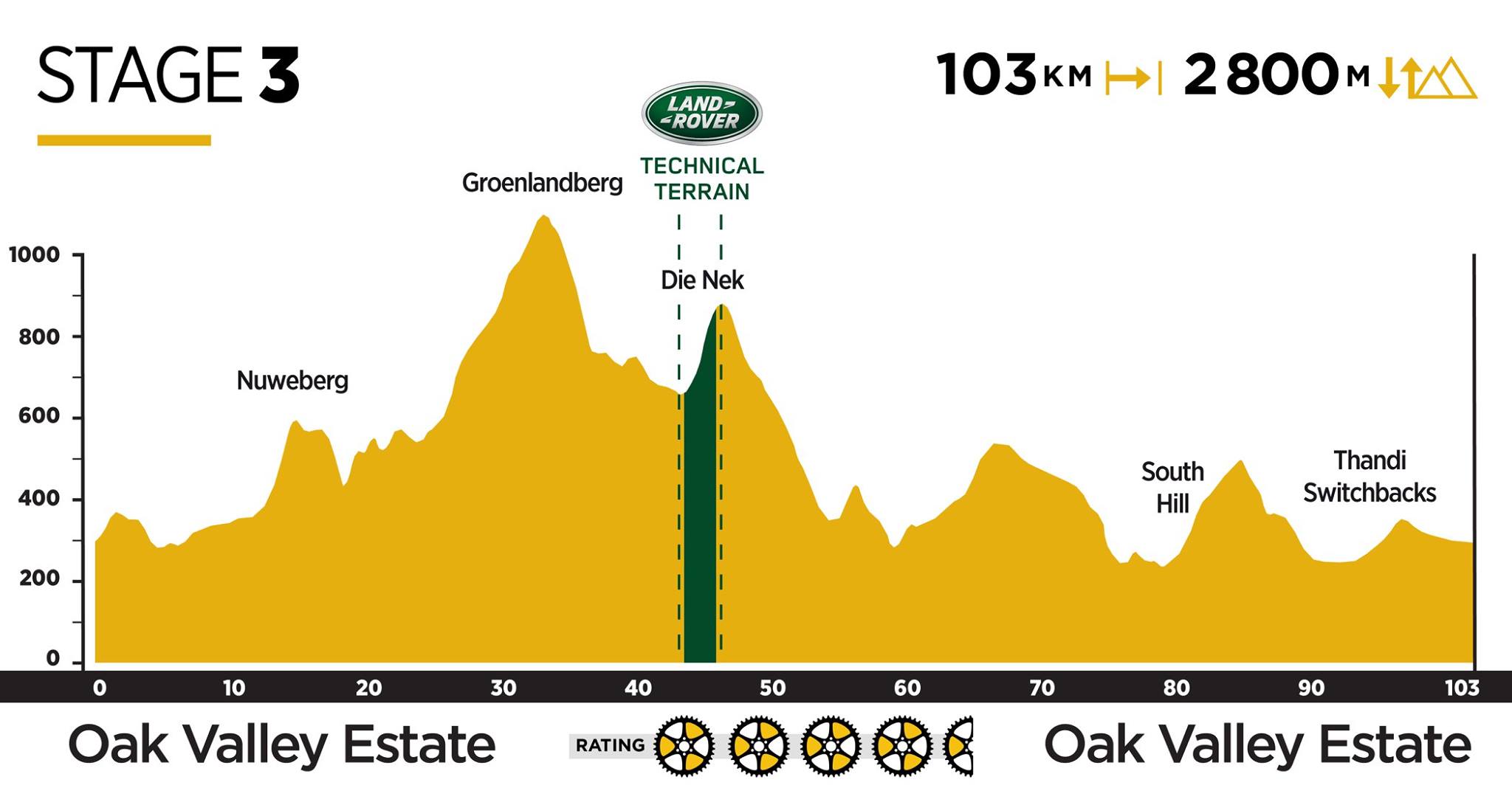 The Emerald Princess
No Absa Cape Epic sojourn in Elgin would be complete without an assault on Groenlandberg. But in 2019 the famed emerald mountain, though the highest point of the route, does not earn the honour of being titled the Queen Stage. None-the-less it remains a stage of epic proportions; with Groenlandberg preceded by the Nuweberg and followed by the South Hill and Mac Daddy climbs. UCI teams will be racing for the Dimension Data Hotspot at the Groenlandberg summit too on a day with serious general classification implications. Further down the field, surviving the stage will be a major psychological step on the trail to Val de Vie Estate. 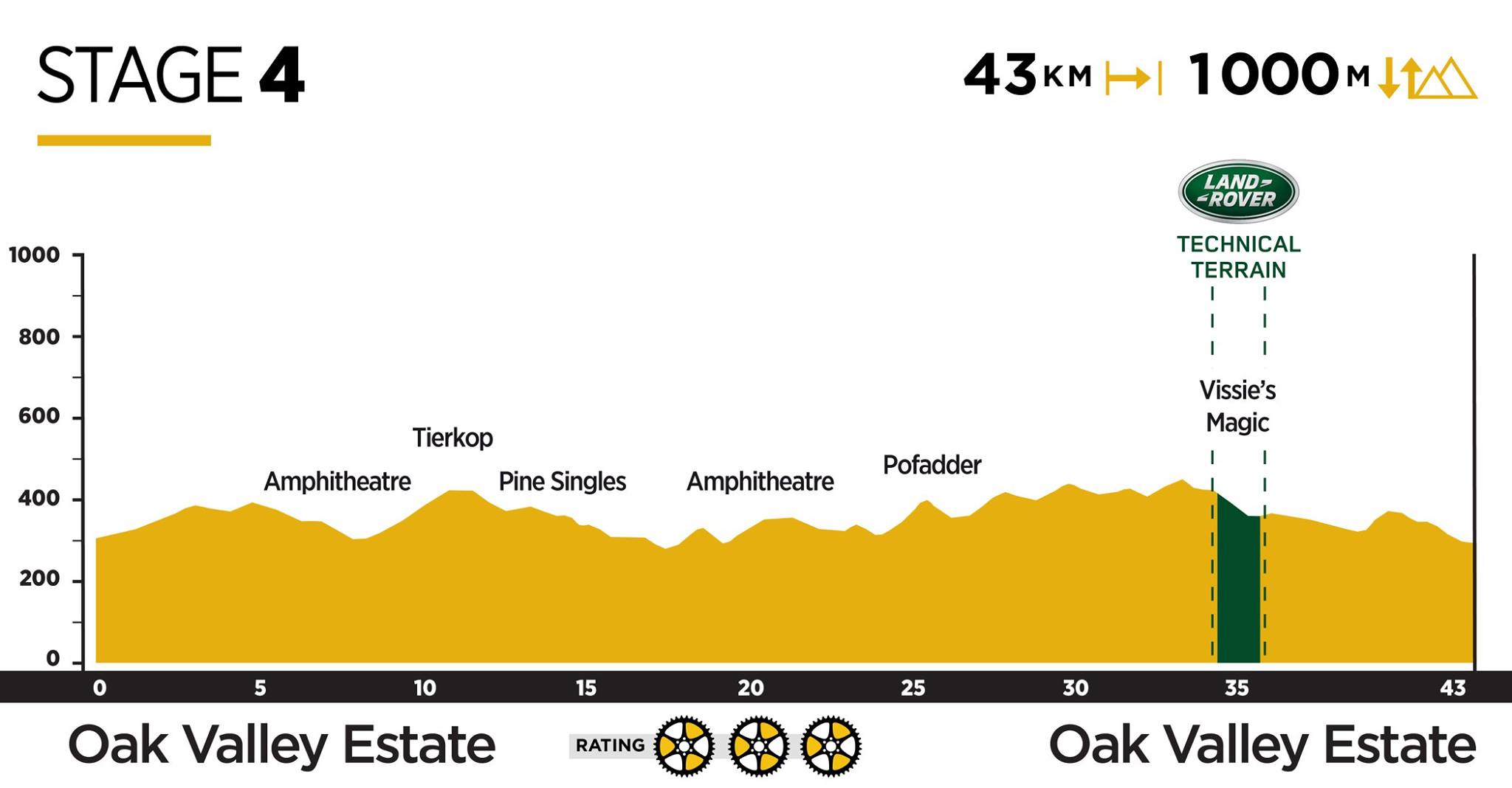 Just Like Clockwork
After three marathon stages the 2019 Absa Cape Epic route provides some relief in terms of distance, but the singletrack filled race against the clock will certainly not ease up on the difficulty. Taking in the best of Oak Valley and Paul Cluver’s plethora of world class trails, but linking them with savage climbs, the mid-race time trial includes famous trails like Pine Singles, Tranquillity, Mamba, Sounds of Silence and Wonderland. The route is fan friendly too. It forms an irregular figure of eight, crossing over at the Paul Cluver Amphitheatre, providing spectators with the chance to see their favourite riders at kilometres 6 and 20. 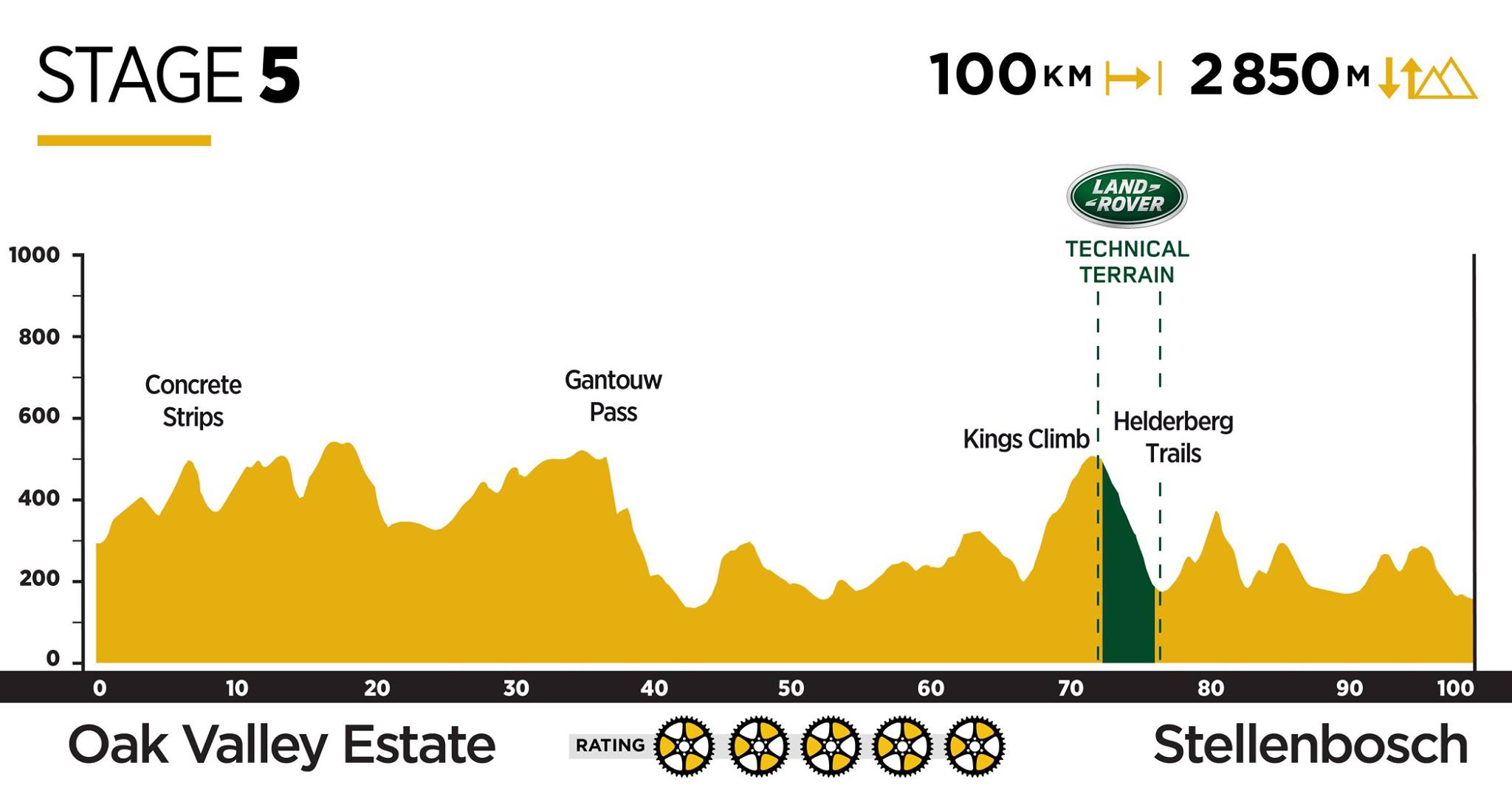 Newton’s Queen
Overcoming gravity and fighting to maintain momentum on the rugged terrain and brutally steep climbs are the orders of the day on the Queen Stage. The Nuweberg foothills search for a weakness; the Gantouw Pass portage provides a test of who has the fastest footwork; and a terrifying new addition gains iconic status at the first time of asking. Snaking its way up the Helderberg, King’s Climb is capped by the Dimension Data Hotspot and followed by the scintillating Helderberg Trails’ singletrack descent. Four sapping vineyard climbs follow, with the Dornier and Mont Marie trails providing respite near the end; before G-Spot concludes the Queen Stage. 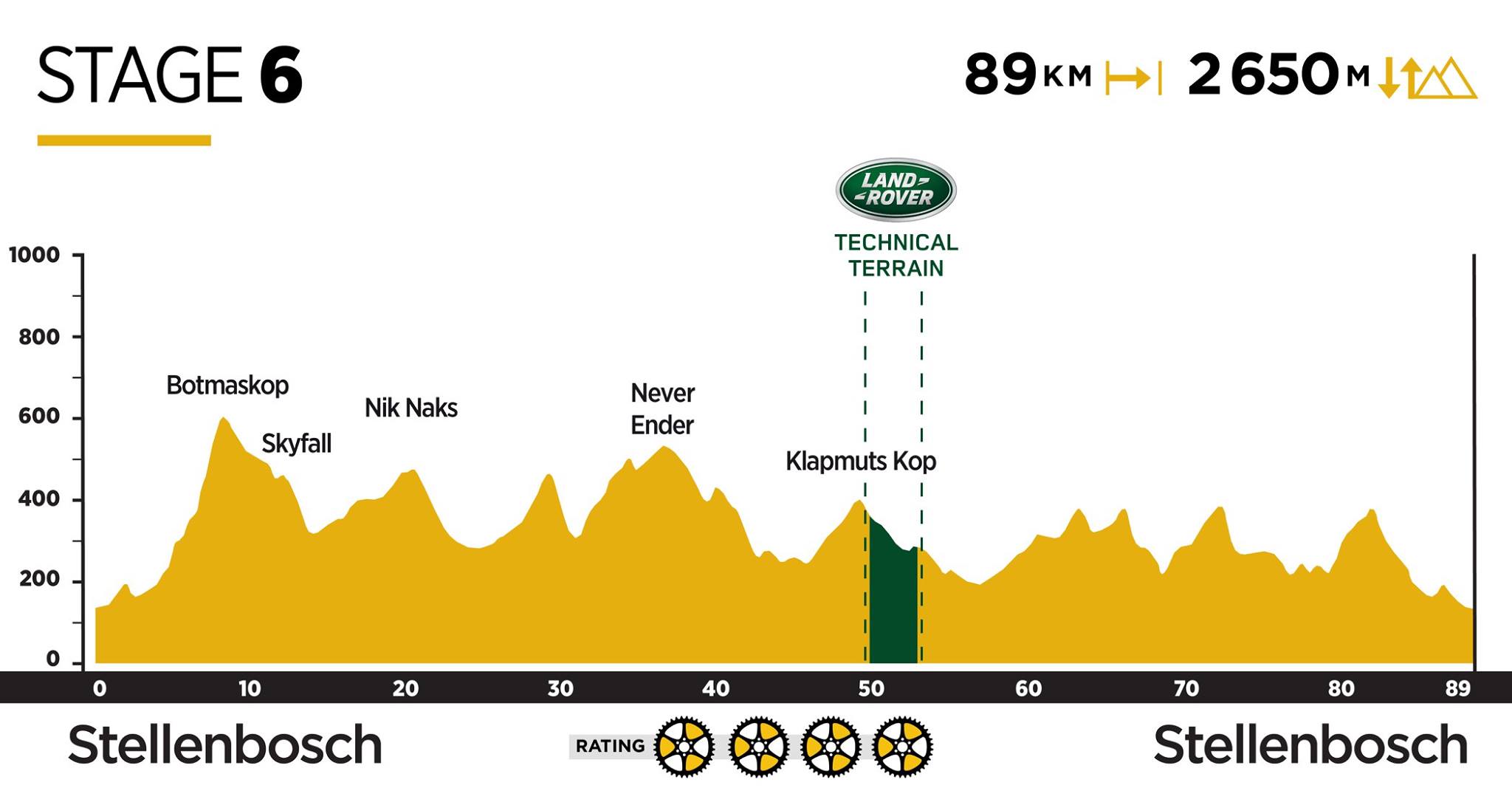 Death, Taxes, Singletracks & Vineyard Climbs
The old saying goes that there are only two certainties in life: death and taxes. When mountain biking in Stellenbosch another two can be added: singletracks and vineyard climbs. Play day, or earn the right to play day, starts with Heart Break Hill then a routine of climb followed by fun follows: over Botmaskop, down Skyfall, across Nik Naks, up Never-Say-Neverender, traversing to Klapmats Kop and the day’s Land Rover Technical Terrain, before heading home via Delheim and Rustenberg Wines to the revamped 90’s downhill track on Botmaskop. Stage 6 provides arguably the best day of riding, if you have the stamina to appreciate it… 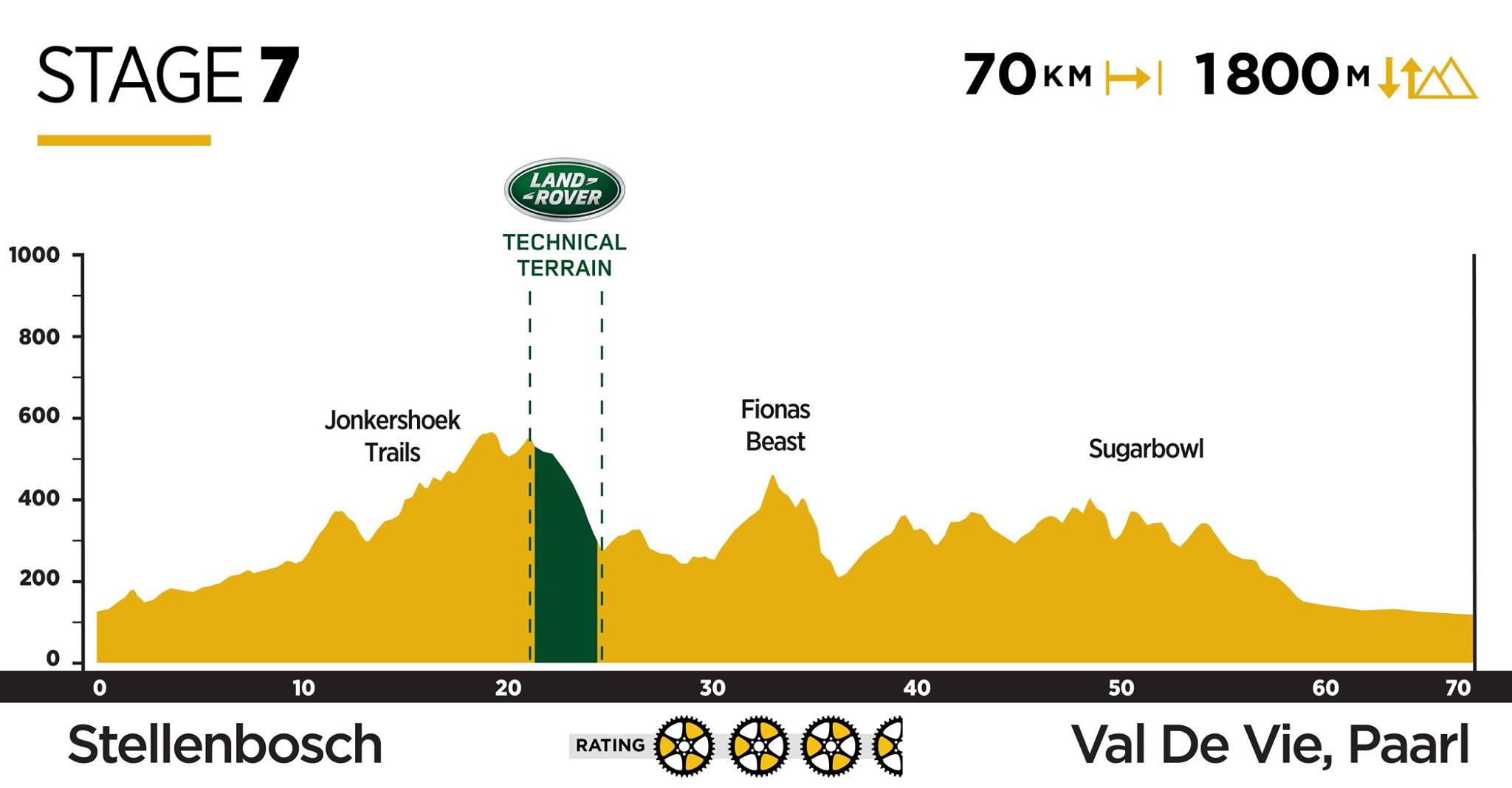 The Grand Finale
No procession through the Winelands the final stage of the 2019 Absa Cape Epic still provides opportunities for general classification shake-ups. Jonkershoek is the first of these with the climb up Never Ending Story followed by singletrack thrills and the Land Rover Technical Terrain: Armageddon. Then it is upwards again; climbing Fiona’s Beast beyond a fairy tale castle, Botmaskop and onto Vuurberg. Boschendal’s Inferno and Sugar Bowl trails precede one final climb and a brand new section of singletrack. Val de Vie lies across a mercifully flat valley floor allowing a few moments for reflection. None-the-less emotions are sure to spill over; rolling across the line – as a 2019 Absa Cape Epic finisher.

Olympic Cycles have been bringing world class service levels to the cycling industry for over 80 years with a depth of knowledge and experience in assisting all levels of riders in selecting the right bike for their needs.

A pivotal brand, our team have been part of the industry long before it existed as it does today.

Made at the tip of Africa. ©